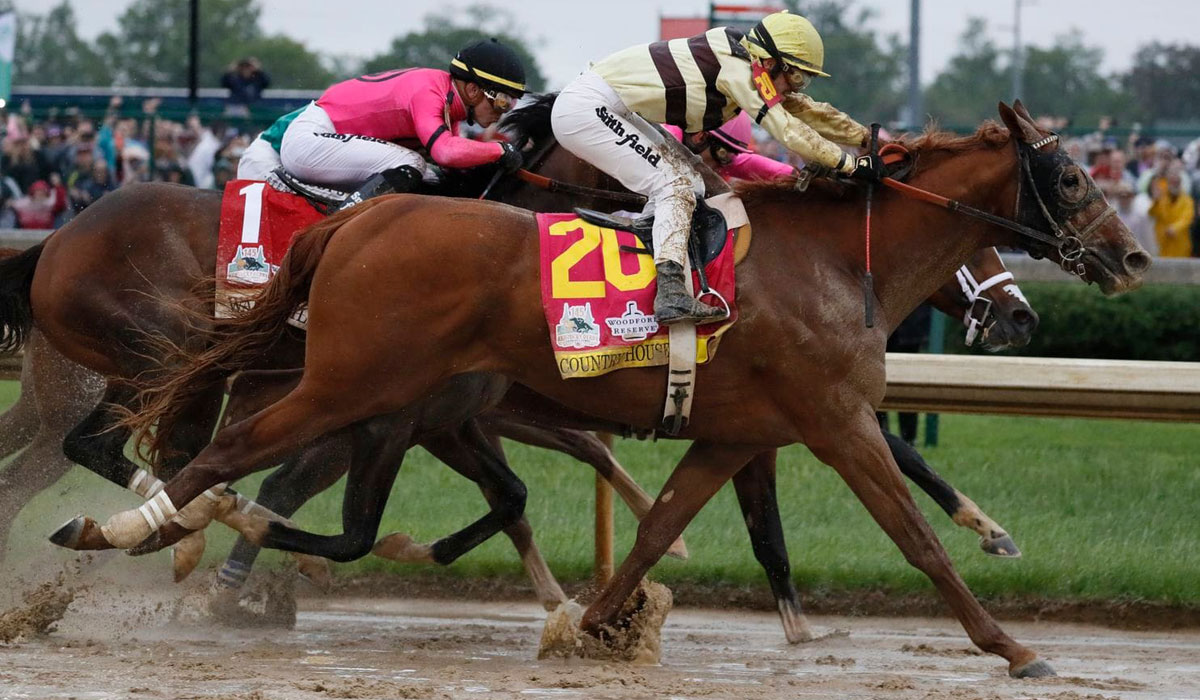 Luis Saez and his speedy colt, Maximum Security, crossed the finish line first in the 145th running of the Kentucky Derby on Saturday after sprinting out of the starting gate to take the early lead and never looking back. The Kentucky bred horse boasted an undefeated resume entering the Derby, having won 4 races in as many starts, including a convincing victory in the Florida Derby. The colt displayed a dominant performance on a sloppy track in the 1 1/4 mile Run for the Roses, but shortly after the race was over, an announcement was made over the PA system at Churchill Downs that had to of made the owners of Maximum Security, Gary and Mary West, put their celebrations on pause. “There is an objection in the last race” was declared about 3 minutes after Maximum Security fended off Country House and Code of Honor for the Derby victory. Luis Saez had already celebrated aboard the beautiful bay and given an interview to a reporter who rode up on horseback seconds after the race was over. Betters were headed to the wager windows to cash their tickets, not knowing that the Churchill Downs track stewards were about to review the race and make the most impactful decision of the horse racing year.

The announcement of the objections was delivered to the crowd of 150,729 people in attendance at the Derby as well as millions of TV viewers, with most probably not giving it much thought as objections and inquiries in races happen frequently, usually resulting in no change to the unofficial order of finish. The jockeys of Country House and Long Range Toddy both filed objections after the race, claiming Maximum Security swerved into a different running lane on the last turn before the home stretch, forcing contact and impeding the pathway of Long Range Toddy and War of Will, as well as slowing the momentum of Country House. After a long 22 minute review, the stewards of
Churchill Downs upheld both objections and disqualified Maximum Security, making his official finish 17th behind Long Range Toddy. The ruling bumped each horse up one spot, giving Country House the official first place finish, with Code of Honor coming in 2nd, and Tacitus finishing 3rd.

This decision shocked the horse racing world and caused a dramatic scene on the track as Maximum Security’s jockey Luis Saez walked away from a camera visibly upset, and Country House’s riding team celebrated the decision. Before Saturday, a horse had never been disqualified for an on-track infraction after winning the Kentucky Derby. The only other disqualification of a Derby winner was in 1968, after the victory of Dancer’s Image was reversed days after the race for testing positive for an illegal anti-inflammatory drug. The owners of Maximum Security filed an appeal to the Kentucky Horse Racing Commission on Monday in an attempt to overturn the disqualification, but the appeal was denied hours later. The final ruling left many ecstatic, and others in disbelief and despair. Maximum Security had approximately $8.9 million wagered on him in win/place/show tickets alone
after going off at 9/2 odds. Roughly $918,000 was bet on Country House to come in first, second or third.

The victory gave the Hall of Fame trainer of Country House, Bill Mott , and 26 year-old jockey Flavien Prat their first Kentucky Derby wins. Country House went off at a jaw-dropping 65-1 and paid $132.40 to win, making him the 2nd biggest long shot ever to win the Kentucky Derby. Donerail won the Derby in 1913 as a 91-1 long shot. The long odds of Country House created some massive payouts, including $11,475.30 for a $1 Trifecta and $544,185.90 for a $1 Super High Five bet (top 5 race finishers). The victory was only the second career win in 7 starts for Country House, who was the first non-favorite Derby winner since 2012. The colt is also the only Derby winner since 2011 to be victorious in the Run for the Roses after not winning a major 100 point prep race before the Derby. The three-year-old had impressive outings in both the Arkansas and Louisiana Derby’s, but was not considered a serious contender to sport the Garland of Roses. Unfortunately, Country House will not be running in the Preakness Stakes to compete for a Triple Crown championship due to developing a cough from a potential viral infection.

The 2019 Kentucky Derby will go down in history as the one with the disqualified winner, but the historic story lines don’t stop there. With this year breaking the record for the most money ever wagered and the 2nd biggest long shot of all time winning the prominent race, this year’s Kentucky Derby will forever be remembered as a unique and entertaining one. You never know what you’re going to get with the Derby, only that it will annually provide special thrills and memories. How people remember their 2019 Derby experience, however, might depend on whether or not the interference ruling was a pleasant surprise, or a costly nightmare.

Justify Dominates at the Preakness Stakes