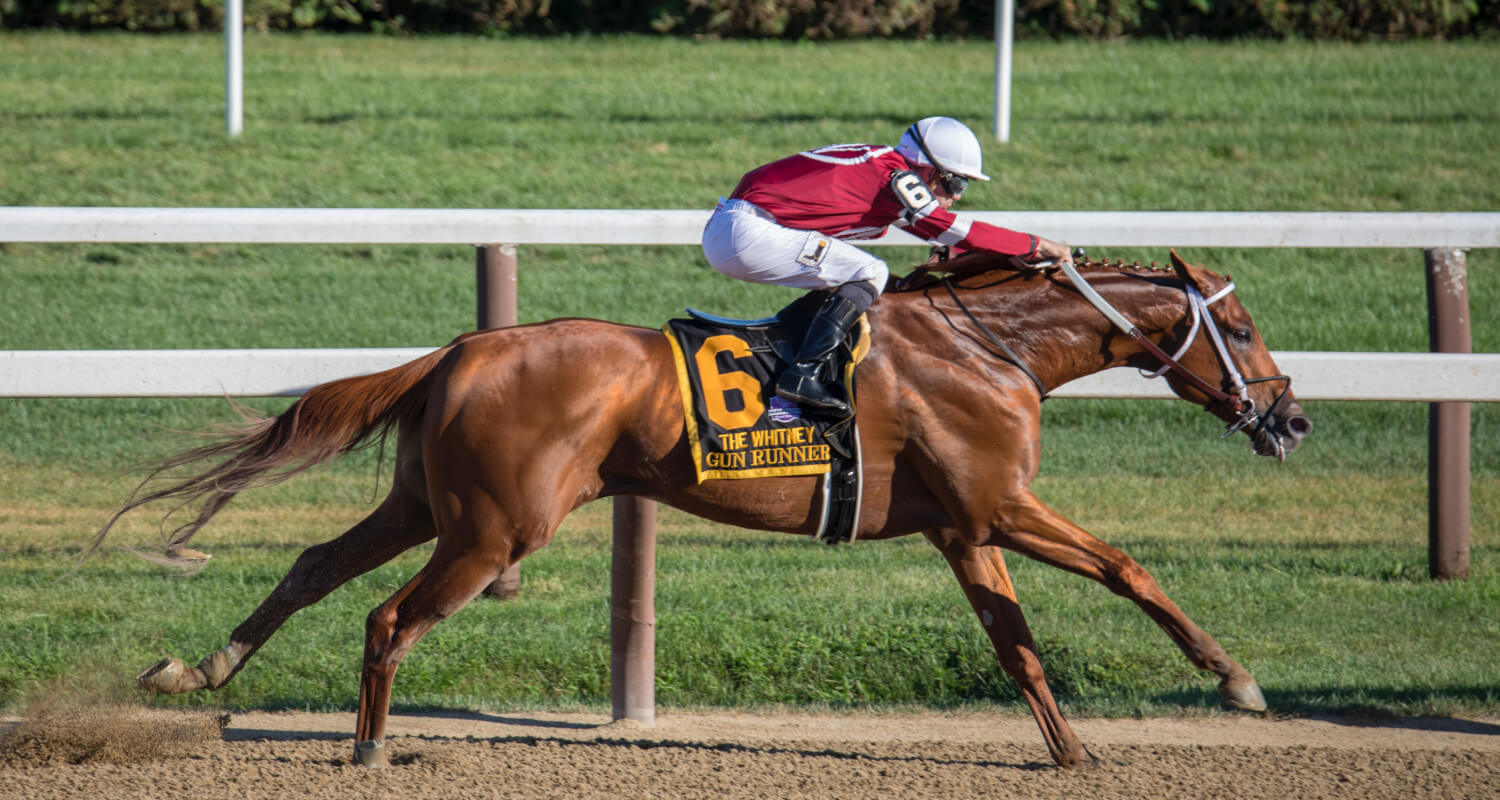 The road to the Kentucky Derby featured a trifecta of races on the first Saturday of February as Gulfstream, Santa Anita, and Aqueduct all hosted Derby prep races that awarded points to the top four finishers. 51 points were awarded all together (10-4-2-1), shaking up the Kentucky Derby leader board and adding new contenders into the mix. The trio of races in California, Florida and New York produced a convincing performance by a favorite as well as an upset from a Kentucky bred long shot.

The upset victory came when Harvey Wallbanger won the Holy Bull Stakes (G2) at Gulfstream Park with Brian Hernandez aboard. The 29-1 long shot rode the rail late in the $350,000 event, defeating the 4-5 favorite Maximus Mischeif in the 1 1/16 mile prep. The two year old broke his maiden at Churchill Downs in November after running second in his first three career starts, and earned 10 points toward the Derby in his second straight win in the Holy Bull. Harvey Wallbanger is trained by Kenneth McPeek and has a career earnings of $299,520. If you cashed an exacta ticket in the Grade 2 race, odds are you left Gulfstream a winner. Everfast, who went off at 99-1, surged toward the finish line to lock up 2nd place by a neck, resulting in a $1,101.70 exacta payout. The winners of the Holy Bull have gone on to have notable success, including the beloved fan favorite Barbaro, who went on to win the Kentucky Derby in 2006. Barbaro shattered his leg in the Preakness Stakes following the Derby, which ultimately led to his death. He remains the only horse to be buried on the grounds of Churchill Downs.

Aqueduct Racetrack, in Queens, New York, held the 145 year old Withers Stakes. The Grade 3 $250,000 race is 1 1/8 miles long and also serves as a prep race for the 100 point Wood Memorial in April. The storied Withers Stakes has showcased some impressive winners in the past as well, including the first ever American Triple Crown winner Sir Barton in 1919. Favorites have dominated the Withers in recent years, winning four of the last seven races, and this year was no different as Tax (2-1) took home first place along with 10 points towards the Derby. Tax, ridden
by Junior Alvarado and trained by Danny Gargan, upped his career winnings to $183,000 with the win. Tax now has 12 points overall, which is good for 8th place on the current leader board. He’s one to keep an eye on moving forward as the Kentucky bred colt will certainly run in bigger preps to try and climb into the starting gate in May. Tax currently sits at 20-1 in the Kentucky Derby Future Wager Pool 2, which can be bet from February 8th-12th.

The third Derby prep of the weekend, the Robert B. Lewis Stakes, is also a 10-4-2-1 point distribution, and features three year-old’s running a 1 1/16 mile race. The Grade 3 $150,000 event doubles as a prep for the 100 point Santa Anita Derby (G1) and has been ran at Santa Anita Park since 1935. Mucho Gusto was a 3-5 favorite and the Bob Baffert trainee did not disappoint. He dominated his way to a 4 3/4 length victory to wrap up his second stakes victory in three months. Mucho Gusto was bred in the Bluegrass State and has looked very impressive in his 4 career starts with Joe Talamo at jockey. Baffert is known as the best in the horse racing business, winning 5 Kentucky Derbies, 7 Preakness Stakes, and 3 Belmont stakes, as well as 7 victories in the Robert B Lewis Stakes. His latest Derby hopeful, Mucho Gusto, has a real chance to make the derby field. There has been 13 Triple Crown Winners since 1875, and Baffert trained the last two with American Pharoah in 2015 and Justify last year. Mucho Gusto will be one horse to monitor closely as the journey to the derby rolls on.

Although it’s still early, the points leader board for the Road to the Derby is taking shape, with multiple contenders competing week after week. Game Winner, another Baffert prodigy, currently leads the board with 30 points after winning all four of his career starts. Baffert will undoubtedly be beneath the twin spires on May 3rd, and if he finds his way to another Triple Crown, he’ll be the only trainer in the history of the sport with 3. 5 Derby prep races remain in the month of February, including the Risen Star at Fair Grounds on the 16th. The Grade 2 event offers a $400,000 purse and will be the first prep race for the 2019 Derby to award 50 points to the winner. With just under 3 months until the big race, excitement and opportunity is building week to week.

Road to the 2016 Kentucky Derby